Well, I have had this comic book site up for a while now. Guess it is really about time to spill the beans on who I really am. I hope to give a quick synopsis on the highlights of how I got from there to here and back again (oh wait, I’m not a Hobbit). I will try to stay with the more interesting highlights and stay away from the tons of mundane. I’m sure you know what I mean. We all have them (ha ha)!

I am what a lot of the media over the years have called a Baby Boomer. My childhood was spent in the fifties and sixties. And this is when I became aware of comic books!! They fascinated me to no end. Although during this time period most of the older generation turned down their noses to comic books. I did not know this, so therefore I had a great time with my limited number of comics.

I used to get them from wherever I could. There was only one store in town that even carried comic books. But then it was a small town and there weren’t that many stores. I also discovered Classics Illustrated, which were some of my favorites. These I had to mail order. But it was always great excitement going to the post office whenever I was expecting a new shipment of my cherished comic books.

Like most middle class families of the era, we didn’t have a great deal of excess money, so I couldn’t buy comic books anytime I wanted. I did collect a weekly allowance of a whole dollar though. Good thing comics were only 12 cents and the Classics Illustrated were only 15 cents (later to go up to 25 cents).

I do remember one time though, a cat had climbed under our house and for one reason or another died. It did start to stink. As it was harder for my father to climb under the house, and he didn’t like dead cat smell (like I did?) he asked me to do it. And when I was finished, he emptied his pockets of change and gave to us. Actually a friend had helped. Boy, a whole new stash of money for comic book purchasing. I can’t remember what all I bought, but I did increase my meager collection by several issues from that little chore.

As I went from youngster to high schooler, I always had a fascination with science fiction and thus the interest in the sub set of comic books. Of course this piqued my curiosity in the sciences while I was in high school, you know, the typical geek. But I didn’t know what a geek was then and I had many friends, played on the varsity basketball team and ran varsity track. Hey, it was a small school. And all through these years I had my card board box full of comic books and other magazines. Famous Monsters of Film Land was another of my favorites. Oh, and let’s not forget my collection of monster trading cards that came 5 to a pack with a stick of gum. Boy I was in geek nirvana.

As I prepared for college in my senior year of high school, I had applied for the Air Force Academy and West Point. My goal was to become an astronaut. Well although I gained nominations to both schools, my eyes were not up to snuff for an appointment to either. So state college it was!!

At this point in time I was able to use an academic honors at entrance scholarship and I attended Utah State University (USU) after graduation from high school in 1970. I enrolled in Mechanical Engineering. And the course work was quite daunting coming from a small school. But I sure learned to adapt. In the meantime, I had gained an interest in skydiving while in high school. So I started college with the intent to go jump out of an airplane. And this I did after about 2 weeks at college.

This, as it turns out, was probably the single biggest excitement that has come through my lifetime. I spent most of the seventies jumping when I could afford it. I was always on a student budget. I ended up with about 150 jumps and some very amazing experiences. Now as far as serious skydivers go, 150 jumps is not all that much. Many whom I jumped with and around, ended up with thousands of jumps and some went on to become world champions in the sport. This is a picture of a skydive a friend of mine and I performed at our hometown of Wendover, UT for the bicentennial (1976) Fourth of July celebration (I’m the one in black). The next pic is us right out of the airplane. My old college roommate went home with me and took his camera. 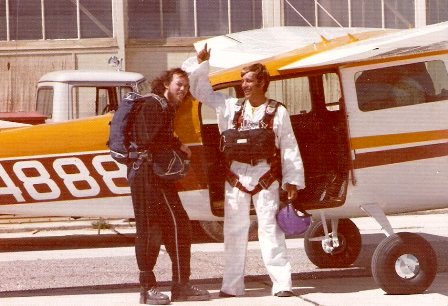 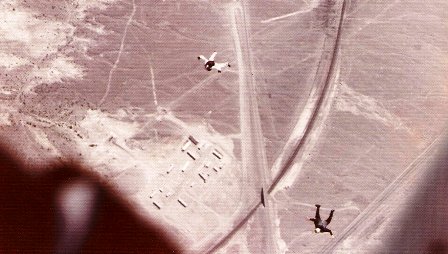 Skydiving just got to be too expensive on a college budget and I ended up quitting with hopes of one day picking it up again as I made more money (famous last words). But boy, was the college scene a different social arena than where I had grown up. Socializing (some would call this partying) with friends and neighbors got to be quite common. And for a while, class work became a secondary activity. Although I still managed to graduate with a B.S. degree in Physics (I had switched from Mechanical Engineering). I did go back to school later and complete my B.S. degree in Mechanical Engineering.

And during this time, I guess you could say, my childhood interest in comic books got left by the wayside. Although, I did end up taking my card board box full of comics, magazines and the like, to college with me. What a mistake! At one point in time I had entrusted my worldly belongings to a couple of friends while I went to Arizona to fight forest fires. At least I thought they were friends. When I came back, that card board box was nowhere to be found. And to this day it makes me sad. If I still had all my comic books now, they would probably be worth a small fortune. Boy, talk about live and learn!!

Rockets and Space; Finally I
Become a Rocket Scientist

After expanding my horizons with several different jobs, I finally landed at Thiokol Corporation, the premier solid propellant rocket motor manufacturer of the free world. It was here that I started my training on rocket motor design and manufacture. This was some very exciting times. Although I worked on commercial and military projects, some of my cronies were working on NASA’s solid rocket boosters for the Space Shuttle. I still had not picked up a comic book in a number of years though.

As times went up and down in the Aerospace industry, I was laid off from Thiokol, but landed at Aerojet. At this time they were designing the next generation solid boosters for NASA. This was in light of the Challenger Destruction in 1986. NASA wanted a second source for solid boosters. There was much political bandying about over this concept. Finally after many engineers and technicians moved to Mississippi and put in many long hours designing the new motors, congress cancelled the program.

I was a western boy by nature and it wasn’t much fun being stuck in rural Mississippi with little chance of another rocket job. So I moved back to the state of Utah and continued my job search there. Lo and behold I was able to again go back to work for Thiokol Corporation who later would become Alliant Techsystems (ATK). I wasn’t working NASA programs anymore, but I was quite happy working about every other program that ATK had to offer.

As luck would have it, although rocket motor design was fascinating, the job became less interesting and less secure. I had already been working on home business ideas for a few years. I became very interested in on line marketing or what has become known as Internet Marketing (IM). I started learning a few different business models and one day, can’t even remember where, I came across Site Build It (SBI).

My first serious consideration for a web business was a site about space and rockets. I had designed full scales rockets and I had built and participated in the subscale model rocket world. I have started a space and rocket site, but it is far from much development yet. I only have 7 pages up.

I decided to resign from my job at the rocket factory and go into full time website building. I do have several websites at this point in time, but my comic book site is the most developed and is my pride and joy. As I got deeper into comic book research and site development, my childhood interests came back into my life big time. I have learned so much more about comic books in the last several years and I also have been building up a new collection.

I have approximately 2200 comic books at the moment and continue to build. These comic books are used as research tools as well as personal interest. One day I plan on cataloging them and creating video tutorials on how to use the cataloging software. And as I continue my search for more comics, who knows, I may find a gem or two worth a sizable bit of money (I can only dream). My comic book site sure seems to get a lot of interest on the Net. I am positioned on the first page of the search engines for many of my keyword focused pages. And I get a lot of positive comments back from my visitors and newsletter subscribers. Hey, here is a wild and crazy idea. Have YOU ever been interested in starting your own comic book website? If so, I have an excellent plan and hosting service for you to try out. It is called Solo Build It and you can explore further about it at my about Solo Build It page . Go check it out and see what you think. And one day, maybe we can link our sites together and help each other become a commanding force in the comic book world on the Net.

Well, this mini bio about myself turned out to be a shade longer than I had anticipated. But I wanted you to get a good picture of me, so it would help you trust my site and what I have to say about comic books. I am emerging as one of the comic book leaders on the Internet. And I hope you book mark my site and explore all the pages I have created for your enjoyment. Go to my

contact me page and leave me a comment with your thoughts about my site. In the meantime, see you around the Net. 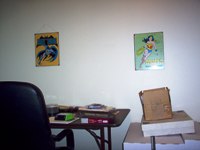 Dave Gieber Owner and Operator of one of the premier (at least in my mind) comic book websites on the WWW.

PS: Again, if you want to learn how I built this comic book site click here on Dave and Solo Build It!

Have your say about what you just read! Leave me a comment in the box below.
[?]Subscribe To This Site
The free eBook that started
it all for my Comic Book Site!
Dave Gieber