Batman, Stories of
a Different Flavor! 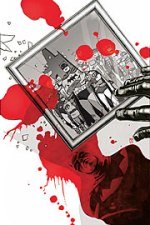 Stop me if you’ve heard this one: Bat-man and Robin take a weekend jaunt to a Caribbean island to hob-knob with several other “dynamic duos” from around the world, and it ends up becoming a very un-campy murder mystery. That’s the premise of “The Island of Mister Mayhew” in issues 667 through 669 of DC’s Bat-man comic.

If writer Grant Morrison’s not doing the impossible, here, it’s something very close. He takes a bunch of “weird c-list crimefighters” (Robin’s words, not mine) and makes them interesting. With the exception of possibly one or two of them, further investigation of such characters, in Morrison’s hands, could prove entertaining, I suspect. To me, it illustrates the adage that there are no bad characters, just characters without the proper story.

What’s more, the writer takes a three-issue tale and gives it a much more expansive feel using well-placed flash-back sequences.

J.H. Williams proves, as he does in most of his projects, why he is a fan-favorite artist. With a flair for realism, as well as a versatility which allows him to delineate between present and past events with apparent ease, Williams “paints” the mood of the story with just the right shades of the suspenseful, the horrific, the macabre, even the pitiful and ridiculous. Yeah, it’s all in there.

Besides that, he may be one of the best Bat-man illustrators in the business. His Caped Crusader is eerily calm, but can easily be imagined housing multiple psychoses. In short, he’s “spooky,” and that’s what Bat-man is supposed to be.

I suppose I should mention that this story builds off of an idea first conceived in the ‘50's, in Detective Comics and World’s Finest Comics, but knowledge of previous history is completely unnecessary for enjoyment of this run, which is uncommon for DC, and to be commended.

These issues of Batman are recommended to older fans of superhero history and those who enjoy a good mystery.

Back to Comic Book Review ( Batman )