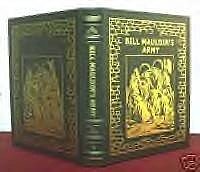 Funny books aren't always funny. They are capable of fully exploring the human condition, including the heights of selfless love and the depths of war.

Bill Mauldin became the most famous cartoonists of his generation by recording his first-hand experiences of the bone-weary drudgery and horror of World War II. He continued his long and illustrious career as an editorial cartoonist, and humor was rarely his focus unless one includes the black sub-genre of haha.

Bill Mauldin's Army is a huge collection of his war cartoons from boot camp, through the fighting in Sicily and Germany, and to de-mobilization as hundred of thousands of soldiers returned home. It is bluntly, painfully honest. Glory is even more rare than haha as his two most famous soldiers, Willie and Joe, trudge through the mud and stench of war.

Mauldin's heavy line, flawless composition, attention to human expression, the environment, and his unromantic treatment of misery is perfect for his single-panel cartoons. His use of pen and grease-pencil is distinctive and powerful.

Mauldin's dialog is brutally real as his soldiers battle hunger, thirst, dirt, disease, the weather, loneliness, fear and Germans. It is difficult to tell which was the greatest threat; you may suspect the unrelenting toil of just staying alive when it seems that everything is conspiring to kill you.

This record of the history of common men and women in un-common times surely captures the feel of the war as well as any history book, documentary, or movie.It is true that time has made some of the slang obscure, but has not erased the importance of Mauldin's work. This volume is highly recommended. MV

Bill Mauldin is a member of the Oklahoma Cartoonists Collection.