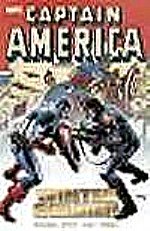 Where comics are concerned, I have to admit to being a continuity buff. I don’t agree with many of the decisions and directions of the Big Two publishers (Marvel and D.C. for any newcomers) these days. Regardless of my personal predilections, however, a well-done piece of work is just that. Marvel’s Captain America: Winter Soldier is such a work.

Winter Soldier tells the tale of the return of Captain America’s teenaged sidekick of World War II, Bucky Barnes. Presumed killed in that war, by Cap and generations of readers alike, it is revealed that Barnes has been a secret weapon of the KGB for decades, doing “wet work” as it were under the codename “Winter Soldier.”

Far be it from me to reveal anything further, as writer Ed Brubaker weaves a fascinating tale rife with suspense, adventure and intrigue. Honestly, elements of this story resemble such fan-favorite t.v. shows as “24" and “Alias,” so fans of those programs should take note. Oh, and there happens to be some superhero action thrown in, to boot. This is Captain America, after all. Just not your daddy’s.

Artist Steve Epting (ably assisted by Mike Perkins) is a joy on this book. His realistic style, attention to detail, expressive characters and mastery of scenes tranquil, frantic and everything in between make him one of the finest artists working in comics, today. This being one man’s review, however, I’ll add that handy and often necessary phrase, “in my opinion.” Then, I’ll dare you to check it out and see if I’m wrong.

Captain America: Winter Soldier is recommended for fans of superhero action and the afore-mentioned programs.