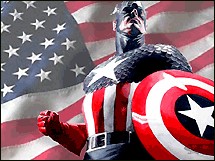 Captain America was the most prominent of a wave of patriotically themed superheroes, which American comic book companies introduced during World War II. With his sidekick Bucky, Captain-America faced Nazis and Japanese troops during his 1940s heyday, but the hero faded into obscurity after the war.

Steve Rogers was born during the Depression and grew up a frail youth in a poor family. While a child, his father died and in his late teens, his mother died. As Steve got older, he became quite horrified by newsreel footage of the Nazis in Europe. So he became very inspired and tried to enlist in the Army.

However, because of his frailty and sickness, he was rejected. But overhearing the boy's earnest plea to be accepted, General Chester Phillips of the U.S. Army offered Rogers the opportunity to take part in a special experiment called Operation: Rebirth. Rogers agreed and was taken to a secret laboratory in Washington, D.C. where he was introduced to Dr. Abrahan Erskine (code-named, Prof. Reinstein), the creator of a Super-Soldier formula.

After weeks of enduring many army tests, Rogers was at last administered the Super-Soldier serum. This would later bring on the Captain America persona. Given part of the compound intravenously and another part orally, Rogers was then bombarded by "vita-rays". These rays turned out to be a special combination of exotic (at least in 1941) wavelengths of radiation designed to accelerate and stabilize the serum's effect on his body.

Steve Rogers emerged from the vita-ray chamber with a body as perfect as a body can be and still be human. A Nazi spy, who observed the experiment, murdered Dr. Erskine mere minutes after its conclusion. Erskine died without fully committing the Super-Soldier formula to paper, leaving Steve Rogers the Sole beneficiary of his genius.

Rogers was then put through as intensive a physical and tactical training program as the army could muster. The training consisted of gymnastics, hand-to-hand combat and military strategy. Three months later, he was given his first assignment, to stop the top Nazi agent called the Red Skull. To help him become a symbolic counterpart to the Red Skull, Rogers was given the red, white, and blue costume of Captain-America.

During the war, Cap served as both a symbol of freedom and America's most effective special operative. But alas, during the final days of the war, he and his partner, Bucky, were trying to stop a bomb-loaded drone-plane launched by Nazi technician Baron Heinrich Zemo. But the plane exploded, killing his partner Bucky, and throwing him unhurt into icy Arctic waters.

The Super-Soldier formula prevented crystallization of Captain America's bodily fluids, allowing him to enter a state of suspended animation. Decades later, he was rescued by the newly formed Avengers and became a cornerstone of the team. His might and patriotism remain undiminished. Captain America thus remains a symbol of liberty and justice.

Captain America represents the pinnacle of human physical perfection. While not superhuman, he is as strong as a human being can be. He can lift (press) a maximum of 800 pounds with supreme effort. He has agility, strength, speed, endurance, and reaction time superior to any Olympic athlete who ever competed.

The Super-Soldier formula that he has metabolized has enhanced all of his bodily functions to the peak of human efficiency. Notably, his body eliminates the excessive build-up of fatigue-producing poisons in his muscles, granting him phenomenal endurance.

Captain America has mastered the martial art of American-style boxing and judo. He has combined these disciplines with his own unique hand-to-hand style of combat. He engages in a daily regimen of rigorous exercise (including aerobics, weight lifting, gymnastics, and simulated combat) to keep himself in peek condition. Captain America is one of the finest human combatants Earth has ever known. But he is also subject to all human vulnerabilities, although his immunity to diseases is extraordinary.

Captain America's only weapon is his shield, a concave disk 2.5 feet in diameter, weighing 12 pounds. It consists of a unique alloy of Vibranium and Adimantium that has never been duplicated. The Shield was cast by American metallurgist Dr. Myron MacLain, who was contracted by the U.S. government to create an impenetrable substance to use for tanks during World War II.

During his experiments, MacLain combined Vibranium with an Adamantium-steel alloy he was working with and created the disc- shaped shield. MacLain was never able to duplicate the process due to his inability to identify a still unknown factor that played a role in it. The shield was awarded to Captain America by the government several months after the beginning of his career.

The shield has great aerodynamic properties. It has the ability to sail through the air with minimal wind resistance and deflection of path. Its great overall resilience, combined with its natural concentric stiffness, enables it to rebound from objects with minimal loss of angular momentum. The shield is virtually indestructible. It is resistant to penetration, temperature extremes, and the entire electromagnetic spectrum of radiation. The only way it can be damaged in any way is by tampering with its molecular bonding.

More for the Captain America Fans

Now if you happen to be into collecting and reading more, I have researched some excellent resources. Here is a collection of Captain America comics and back issues . I don’t think you will be disappointed.

You may very well find a tidbit or two worthy of your interest. And of course, the ole standby, Amazon has a few items to tickle your taste buds. Just click on the image to the left.Don’t stay too long though, and come back here.

If you want to keep up on the varied and interesting activities going on in the world of comic books, then feel free to sign up for my newsletter “Comics Galore” in the form below. And by all means, I would love to hear your comments and opinions on the Captain America character. You can sure leave them for me at my contact page in the menu at the left. I may even be able to include them in my newsletter. I thank you ahead of time.