Cowboys and Aliens,
Whoa there Partner! 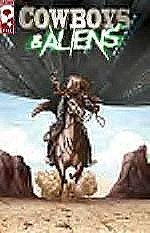 Being a fan of well-done western and science fiction comics, I immediately recognize that a combination of the two genres is not a natural. I also know that my curiosity about such an undertaking certainly is. Thus, I felt compelled to investigate creator Scott Mitchell Rosenberg’s Cowboys and Aliens from Platinum Studios. You should, as well.

The scenario is straightforward; alien invasion during the days of the Wild West. The concept itself is enough to stoke the interest of many readers, I should think. And, thankfully, the creators weren’t content simply to rest on an unusual idea.

Writers Fred Van Lente and Andrew Foley introduce us to Zeke and Miss Verity, a couple of range riders hired to safeguard a wagon-train to Silver City, across hostile Apache territory. Enter: a crash-landing alien vessel and a hostile band of extraterrestrials. The result: The need for cowboys and Indians to not just get along, but ally themselves with one another in order to save the earth from being enslaved.

Characterization is the strong suit in this story. I especially enjoyed the writers’ portrayal of the Apache. Their interaction with each other, as well as the “white man” is entertaining and believable. Most admirable, however, is their reaction to a first encounter with aliens. No bowing and scraping to the gods of the stars, here. The Apache are portrayed as an intelligent, sophisticated race who approach the invaders as just another strange group of people. “I doubt they speak Apache. Maybe the white man’s tongue.” A refreshing alternative to the all-to-common view of the “noble savage.” It more than makes up for a romance between Zeke and an alien female that seems a little....forced.

Combine a fun story with the bold lines and clear, expressive style of artist Luciano Lima, with assists by Magic Eye studios, and you have an all-around entertaining venture. For a mere $4.99 to boot! Cowboys and Aliens is highly recommended.