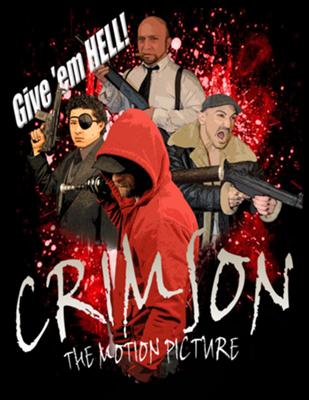 CRIMSON: The Motion Picture is a feature length action film with a comic book theme. The plot: After suffering a tragic accident, comic book artist Walter Levitte takes on the persona of his latest character, CRIMSON, and proceeds to clean up his town of the Irish Mafia.

Director's statement: After my first feature film "Break The Sky" played in Hollywood to a packed crowd, I was left with the feeling that I needed more. Mike Shimmel brought the rough script for 'CRIMSON' to me and I immediately knew he had something. We made some changes, recruited a solid crew, and held auditions. The entire process was a rollercoaster ride, both physically and emotionally.

There were many aspects within this movie that I hadn't explored before, mostly regarding the stunts and equipment. We had guys flying through glass cabinets, nunchuks, explosives, professional fight choreography; the whole nine yards. I have always enjoyed stories with well rounded characters and an anti-hero. If anything else, I have walked away from this experience a better director, and I'm eager to start the next one!

For more information, go to the Official CRIMSON website at: www.CrimsonMovie.com

Join in and write your own page! It's easy to do. How? Simply click here to return to Comic Book News and Reviews.