Cyber Force Joins the X-men,
is this what We Want? 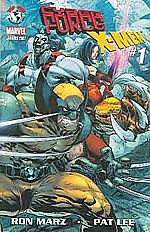 Remember those TV commercials where peanut butter is accidentally mixed with chocolate to produce a surprisingly tasty new confection? Betcha never thought of CyberForce and the X-Men as confections, didja.

Two of the most successful super-teams have been jammed into one piece of comics eye-candy in CyberForce/X-Men #1, co-produced by their re-spective publishers. But is this not-so-surprising concoction palatable?

These teams are so compatible that if you strip the packages [costumes] off of these characters they are almost interchangeable. The only danger for super-team fans who buy it is an overdose of clenched teeth and fists.

Regular readers of Suspended Animation have already noticed an uncharacteristic absence of plot analysis. That’s because the main feature of this issue is one long fight, and its backup feature is just the introduction to another story stripped of color.

So, if plot is virtually non-existent, then characterization takes the center of this paper stage? While CyberForce/X-Men is well written within its self-imposed limits, the answer must be...uh, no. Art ‘tis the star, me bucko. ‘Tis the art that recommends this new crossover title, and it is very bold, dynamic, and muscular.

Muscular may seem an unusual description for an art style, so a definition may be handy. Everything from muscles to machines to planets is drawn massive. Heavy lines and exaggeration are the keys to this style, and don’t think for a minute that violence is shunned. But this violence is so exaggerated that it isn’t easily confused with real world mayhem.

All superhero worlds are self-contained realities with rules that parallel ours enough to suspend disbelief for readers. This world is one fun romp, and Cyber Force/X-Men recommended for fans of the subgenre.