The Green Lantern, So Many
Faces for One Character! 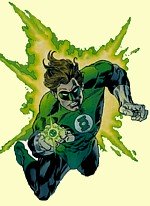 Quite frankly I had not touched base with the Green Lantern character since my youthful days of comic book bliss. I was quite unaware of the deeply entwining multifaceted character history. Several separate individuals have taken on the Green-Lantern role over the years. There has even been a League of some 3600 characters that have intrigued fans throughout the character history.

Several individuals have assumed the character identity over the years. Each of them possessed a special ring called a power ring, which gives them great control over the physical world as long as the wielder has sufficient willpower.

While the ring of the Golden Age Green-Lantern (Alan Scott) was magically powered, the rings worn by all subsequent characters were the creations of the Guardians of the Universe who granted such rings to worthy candidates across the universe. These individuals made up the intergalactic police force known as the Green-Lantern Corps.

The character was a relatively generic superhero until 1970, when DC paired the Silver Age Lantern (Hal Jordan) with the archer, Green Arrow, in a groundbreaking socially conscious comic book series. This era helped make Green-Lantern popular. In the last twenty years, DC has placed different individuals in the role (most permanently Kyle Rayner and John Stewart), sometimes irking longtime fans.

The first Lantern was Alan Scott, an engineer who had come into possession of a magic lantern. From this he crafted a power ring which gave him a wide variety of powers, and which had to be charged every 24 hours by touching it to the lantern for a time.

Scott was a founding member of the Justice Society of America, and starred in his own title, Green-Lantern, during the 1940s. His adventures during the Golden Age of comic books came to an end when superheroes fell into disfavor in the industry in the early 1950s. The Justice Society’s adventures ended with All-Star Comics #57 (1951).

A few years later, DC Comics revived the Green-Lantern with a new character. Hal Jordan, a test pilot was given the ring by a dying alien, Abin Sur. Jordan's creation was motivated by a desire to make him more of a science fiction hero (editor Julius Schwartz being a longtime SF fan and literary agent) to boost sales.

By the late 1960s, however, the Lantern's popularity was flagging. New creators Denny O'Neil and Neal Adams attempted to spark new interest by adding the character Green Arrow to the series. The two superheroes would travel through America encountering various "real world" issues, to which they each reacted in different ways.

Green-Lantern was fundamentally a lawman while Green Arrow was a liberal iconoclast. The experiment was years ahead of its time, on the strength of Adams' stunning detailed and dramatic artwork and O'Neil's intelligent and thought provoking (but often heavy-handed) stories, and was not a commercial success. DC editor Julius Schwartz dubbed it "relevance" and the Adams/O'Neil era was one of the earliest efforts of comic books to become more than light fantasy.

Finally cancelled in 1972, the character became the back-up feature in The Flash until 1976, when Green-Lantern/Green Arrow was re-launched minus the "relevance" of its previous incarnation.

By the eighties, Green Arrow left the title as the focus gradually shifted from Hal Jordan to the Green-Lantern Corps as a whole. After being exiled to space for a couple years, Jordan gave up his ring for a time. His role was then assumed by fellow earthman John Stewart.

Stewart had been introduced by O'Neil & Adams years earlier during the "relevance" era. Yet another Green Lantern of Earth, Guy Gardner, created during the sixties to serve as Jordan’s back up within the GL Corps soon followed him. After Jordan took up the ring again, he was joined by a legion of other Green Lanterns, both human and alien.

Sales had slumped again by the 1990's and, in a decision that would cause much outrage and controversy among fans of Hal Jordan, editor Kevin Dooley had writer Ron Marz script Emerald Twilight. This detailed Jordan's descent into villainy and ultimately replaced Green-Lantern with a younger, more modern character. In the story Jordan went insane following the destruction of his old home, Coast City, by the villainous alien Mongul (an event spun off from the Death of Superman).

Jordan destroyed the Green Lantern Corps and the Guardians. He absorbed their power and took the name Parallax. One Guardian survived and passed one remaining ring on to a randomly chosen human named Kyle Rayner. After learning to use the ring and redesigning the costume, Rayner established himself as a new hero and joined a new incarnation of the Justice League (and succeeded in boosting sales of the series).

Despite initial hostility towards the new character from fans, Kyle Rayner eventually won a sizable following of his own. When it was hinted that Hal Jordan might return to the role of Green Lantern, a furor of protest arose trying to keep Rayner in.

Hal Jordan eventually returned as Green Lantern, and was cleared of the crimes committed as Parallax. In a 2005 miniseries called Green Lantern: Rebirth, it was revealed that it was the work of a cosmic fear parasite that possessed Jordan. In current continuity, Alan Scott, John Stewart, Guy Gardner, Kyle Rayner and Hal Jordan all operate concurrently as Green Lanterns.

An in depth description of the amazing ring and all its powers can be read on the next page. Click on over to the Green Lantern Ring.

More for the Green-Lantern Fans

Now if you happen to be into collecting and reading more, I have researched some excellent resources. Here is a collection of Green Lantern comics and back issues . I don’t think you will be disappointed.

You may very well find a tidbit or two worthy of your interest. And of course, the ole standby, Amazon has a multitude of items to tickle your taste buds. Just click the image to the left. Don’t stay too long though, and come back here.

If you want to keep up on the varied and interesting activities going on in the world of comic books, then feel free to sign up for my newsletter “Comics Galore” in the form below. And by all means, I would love to hear your comments and opinions on the multitude of Green Lantern characters. You can sure leave them for me at my contact page in the menu at the left. I may even be able to include them in my newsletter. I thank you ahead of time.