In the Wake of Heroes Debuts Summer 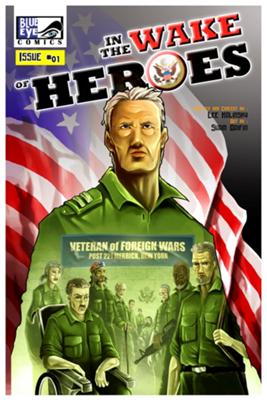 In the Wake of Heroes Debuts Summer
Comic Debut Challenges Healthcare and Ageism in America!

NEW YORK - The tour of duty begins June 2011 with the first issue of In the Wake of Heroes. The 16-page issue from Blue Eye Comics confronts the nightmares of elder care in America.


"In the Wake of Heroes is a story that blends a little fantasy with real life problems of the older generation," said Lee Kolinsky, creator and writer. "It challenges the system to step up their game, increase the amount of care-workers in the assisted living facilities and provide a fulfilling program that maintains the pride of our seniors."

Follow Colonel Jason Roman as he watches his buddies experience the harsh truths of ageism, family neglect and the issues of senior living. Tired of seeing his generation left behind by society, the Colonel recruits a wild bunch of geriatrics and launches a full scale kamikaze-style operation across the globe. In return, he hopes to provide his peers with some final moments of dignity and a fully funded military funeral.

Produced by Blue Eye Comics, In the Wake of Heroes is a new series written and created by Lee Kolinsky with art by Sham Arifin. For more information contact inthewakeofheroes@gmail.com or go to http://www.inthewakeofheroes.blogspot.com/ .

Join in and write your own page! It's easy to do. How? Simply click here to return to Comic Book News and Reviews.