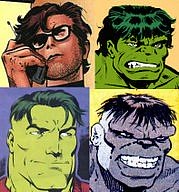 The Incredible Hulk, as we all now know, is the alter ego of Dr. Robert Bruce Banner, a genius in nuclear physics. As a result of exposure to gamma radiation, Banner often becomes one of a number of large, superhumanly strong, green or gray creatures. Over the years, Marvel has created several Hulk manifestations to increase readership appeal.

The Hulk has always been classified as a superhero, but he and Banner have shared a Jekyll/Hyde type of relationship. The most well known Incredible Hulk personality has little intelligence or self-control and can cause great destruction. As a result, the military as well as other superheroes have hunted him. Bruce Banner considers the Hulk a very burdensome curse.

Although an atypical superhero, the Hulk has consistently been one of Marvel's most popular characters. In recent decades, comic book writers have portrayed the character as a symbol of inner rage and Freudian repression. The Hulk's existence has been explained as an after-effect of child abuse and latent multiple personality disorder.

Dr. Bruce Banner: Of course, without Bruce Banner there is no other Hulk personalities we can enjoy. He is indeed a genius and a talented scientist. He possesses a mind so brilliant that it cannot be measured on any known intelligence test. However, he has often been emotionally repressed throughout his history.

Bruce Banner lived through a difficult childhood. His father, Brian Banner, was convinced that his own work with radiation at Los Alamos had resulted in a mutant son. Bruce's mother Rebecca really loved him. This, in turn, led his father to becoming very jealous of Bruce and hating him all the more. He used excuses to keep Bruce away from his mother, often leaving him in the care of Nurse Meachum, who barely tolerated the boy.

When Bruce demonstrated an abnormally high intellect, Brian took it as proof positive that his son was a monster and began physically abusing both Bruce and Rebecca. Rebecca eventually tried to flee with Bruce, but was killed by Brian in the attempt.

At first, Bruce refused to testify against his father. He was later convinced to reveal the truth, which ended in his father being institutionalized for many years. During the turmoil of his youth, Bruce developed a coping mechanism. He created an imaginary friend that he called "Hulk". And Bruce continued to use this coping technique at least into his high school years.

In later years, Bruce’s father was released from the institution and briefly moved in with Bruce. Brian's uncured insanity and still holding deep-seated hostility against Bruce led to an attack to kill Bruce at the site of Rebecca's grave. But instead, the tables became turned and Brian ended up dead by Bruce’s hand.

However, Bruce blocked out these memories, and chose instead to forget that his father had moved in with him at all. He remembered meeting his father again at the site of the grave, having a confrontation, and then watched his father leave. The police reports would state that Brian Banner was killed by muggers, and Bruce went on to believe this until the truth was revealed to the Hulk years later.

Savage Hulk: This is the best known of the Incredible Hulk characters. He is generally considered the strongest of all the Hulk personalities. He was also the one with the longest consistent tenure, despite not appearing for more than a year in a row since the early 1980s.

Due to Brian Banner's abuse, the Savage Hulk diverged from Bruce during early childhood. This Incredible Hulk possesses the IQ and temperament of a young child. He typically refers to himself in the third person, and often claims that he wants to be left alone followed by frequent temper tantrums. Banner's transformation into the Savage Hulk is generally triggered by his own anger.

The Savage Hulk is normally depicted as green-skinned and heavily- muscled with a loping, ape-like gait. The mouth area of his face is greatly enlarged, and his nose is extremely short as a result. He rarely wears upper body clothes due to being ripped off during transformation. He does though, retain remnants of Banner's trousers (which are often colored purple). I am sure this has helped in attaining the Comic Code Authority seal of approval. The Savage Hulk's strength-level in a calm state ("calm" for him) is approximately 85 - 90 tons. His strength greatly increases with rage and quickly surpasses 100–ton strength capabilities. This is more due to a greater efficiency in energy usage than an increase in actual power though. During his enraged state, he is able to lift weights far past 100 tons.

Gray Hulk ("Joe Fixit"): The gray Incredible Hulk personality briefly appeared (with green skin) towards the end of the Hulk's original series in the 1960s. This personality (with gray skin) would re-emerge in the mid-80s. The character's most notable escapades were as a Las Vegas enforcer called "Mr. Fixit". Berengetti, the man whom Hulk worked for, referred to him as "Joe". Later this was combined to form "Joe Fixit".

The Gray Incredible Hulk diverged from Bruce Banner during late adolescence or his college years, as the repressed Banner attempted to deny his sex drive. Gray has average intelligence, although he would occasionally display knowledge and intellectual ability that were normally associated with Banner.

He was cunning, crafty, hedonistic, arrogant, and hard-to-reach. He did though, have a conscience he often tried to hide. He is the only Incredible Hulk who has both manipulated and actually attempted to be rid of Banner, as Banner has often attempted to "cure" himself of being a Hulk.

For most of the Gray Hulk's existence, he would generally appear only at night. There are indications that this is because of Banner's shame of this side of his personality: He only lets it come out when it is dark, and no one can see him.

This Hulk was gray-skinned for all but his earliest appearances. He is also the smallest of the Hulks, though still towers over the largest of humans. He also has the lowest base level of strength, which at the upper limits allow him to lift 75 tons in a calm state. Otherwise, he looks like a less extreme version of the Savage Hulk, with normal length arms and a less hunched back. He dresses in made to measure suits when he can. When left in Banner's clothes after a transformation, the clothes are often left on in whatever condition they were in after transformation.

Merged Hulk ("The Professor"): This Incredible Hulk was created with the merger of Banner and the two previous Hulk characters. This Hulk's most notable period was as an associate, and later as the leader, of the Pantheon.

This guy is not saddled with most of Bruce Banner's emotional hang- ups, but he can still be prompted into insane rage. The Merged Hulk, or Professor Hulk, possesses Banner's intelligence, the Gray Hulk's cunning, and the Savage Hulk's strength. However, the Professor Hulk isn't able to tap into the famed rage enhanced strength with the same efficiency as the Gray and Savage Hulk.

Once the adrenaline of the Professor's body reaches a certain level, he begins to transform back into Bruce Banner himself. Hence, the Professor's upper strength level is vastly less than those of the other Core Incredible Hulk personas. The Merged/Professor Hulk is green- skinned and is the tallest and largest personality. Despite his exaggerated musculature, he looks basically like a scaled-up human and walks normally. He has a proportionally larger version of Banner's face, and always dresses in clothes appropriately sized for him (although he occasionally foregoes shirts and shoes).

This aspect of the Incredible Hulk is one of the most controversial. Peter David, who created this personality, considered him to be a true unification of the existing personalities. David states that the personality for the Merged Hulk was originally modeled after Val Kilmer's role as "Chris Knight" in the film Real Genius.

The Incredible Hulk has been mildly successful and popular in other forms of media. A more in depth discussion can be found about

The Incredible Hulk and other media on the next page. Click on over and find out.

Now if you happen to be into collecting and reading more, I have researched some excellent resources. Here is a collection of of Incredible Hulk comics and back issues . I don’t think you will be disappointed.

You may very well find a tidbit or two worthy of your interest. And of course, the ole standby, Amazon has a few items to tickle your taste buds. Just click on the image to the left. Don’t stay too long though, and come back here.

If you want to keep up on the varied and interesting activities going on in the world of comic books, then feel free to sign up for my newsletter “Comics Galore” in the form below. And by all means, I would love to hear which Incredible Hulk personality is your favorite and why. You can sure tell me at my contact page in the menu at the left. I may even be able to include your comments in my newsletter. I thank you ahead of time.