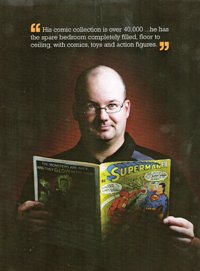 I admit it. I was a comic book addict for many years, starting my addition off primarily with the Marvel Age of Comics. Spiderman, Kid colt, Hulk, Fantastic Four, Iron Man and the offerings of DC, Batman and Superman haunted my dreams and took the proceeds from my pop bottle drives to feed my habit. In those long forgotten days, you didn't acknowledge as a n adult that you liked comic books. You asked for and were given a brown paper bag to put them in so you didn't have to admit to your guilty pleasure.

Fast forward to 2011 and SHAZAM! Comic books have become mainstream popular culture and big business at the movies. The Holy Grail for collectors includes Action 1 and Detective 27, the first appearance of Superman and Batman. In 2010 a reportedly mint condition of Action 1 sold for $1.5 million US. Not a bad rate of appreciation for a comic book which sold for 10 cents in 1938!

Here is the plot to date: Matt Broom is the 35 year old, mild mannered manager for the five Orangeville Tim Horton's by day and a comic book aficionado by night, and any available daytime hours. Matt attended the University of Windsor for two years studying communications, as he thought he wanted to be a journalist. Realizing the job market for journalists was poor, and being Orangeville born and raised, he returned to Tim Horton's where he had started behind the counter in 1991. Matt likes Orangeville for its friendly small town feel, even though he knows it is growing and changing.

While at University of Windsor, he found the city just too big and loud. Last year he married and his wife, Amy who is from Alton, likes Harry Potter and is a big fan of TV shows such as Mash and The Office. Amy is very tolerance of his hobby which sees him buying 40 to 50 new comics monthly. His comic collection of over 40,000 plus and growing, is located in his apartment and storage units. Matt says rather philosophically, "There are far worse things you could do with your money."

In his modest apartment (he is saving to buy a house), he has the spare bedroom filled, floor to ceiling, with comics, toys and action figures. Matt finds and buys back issues of his favorite comics at antique malls, garage sales, used book stores and flea markets, as well as from on-line US retailers and auctions such as Mile High Comics and Million Comics.

Matt's passion for sequential art, as some people refer to comics today, started at age 6 or 7, as it does for so many comic fans, myself included. He clearly remembers buying his first comic, Fantastic Four #259, and the great visual impact the art had on him. His favorite comic authors are George Perez and John Byrne and his all-time favorite comic characters are Hawkeye (Marvel) and Superman (DC). Matt loves the visuals of the Hawkeye character, a master archer, and still loves the Superman costume which creators, Shuster and Siegel, reportedly based on a carnival strongman with tall boots, tights and a cape.

Many Canadians are unaware that Superman has a strong Toronto connection as Joe Shuster moved to Cleveland, Ohio at age 10 from Toronto where, legend has it, he was a paperboy for the Toronto Star. I can confirm that the newspaper Clark Kent works for in the first comic appearance in Action 1 is the Daily Star, later changed to the Daily Planet. Coincidence or fate, that the genesis of one of Matt's favorite characters was within easy driving distance from Orangeville? You decide!

This summer Orangeville's Galaxy Cinema has already seen the successful opening of THOR, Green Lantern and Captain America. 2012 promises to be a bumper year for comic book movies with The Avengers, Batman in The Dark Knight Rises, and rebooted Superman and Spiderman movies. Matt says he enjoyed THOR as its high budget resulted in spectacular visuals. He felt using a relatively unknown actor in the THOR lead role let the movie sell itself.

Matt calls comics an "aging hobby" but feels that such industry sponsored events as the May annual free comic book day are helping bring youth back to comics and away from their computer screens. The favorite characters of many generations are now immortal and will never die in popular culture. We can certainly look forward to many more years of adventures with the Fantastic Four, Spiderman, Superman, Batman and Wonder Woman!


David K. Dorward is an Adjunct Professor at the Business Schools of Humber and George Brown College as well as being a long time comic book fan. He can be reached directly at dkdorward@sympatico.ca if you have any comments or have an interesting story you believe should be told in the pages of Orangeville Living.

Join in and write your own page! It's easy to do. How? Simply click here to return to Comic Creator.