Metal Hurlant, what
is this about? 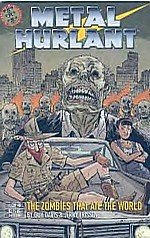 Metal Hurlant #8/65 pgs. and $3.95 from Humanoids Publishing/various writers and artists/sold at on-line auctions, storefront and on-line comics shops, and at www.metalhurlant.com.

Once upon a time there was a French comics magazine named Heavy Metal. It was an anthology title filled with beautiful art, often incomprehensible stories, graphic violence, and lots and lots of naked men and women. It went away in the good old U.S.A.

Then there was a French and American comics magazine named Metal Hurlant. It was also filled with beautiful art, but most stories were understandable and enjoyable, and the violence and sex was toned down a bit. It went away as well.

The eighth issue explored an American icon resurrected in the future only to be doomed by uselessness, a world where zombies are a commonplace nuisance, and a knight intent on slaying a dragon that is a little less and a little more than he appears.

Yes, there are three incomprehensible stories; all are possibly chapters in continued stories. Intriguing art does not save them from obscurity. A simple summary of what had gone before sure would have helped otherwise befuddled readers.

The art, wildly divergent from story to story, is all excellent.

Although Metal Hurlant is again extinct, there is much to recommend past issues to adult readers who aren't offended by crass language, nudity, and blood. This series, however, was never for children.

R. A. Jones is one of the writers in this issue of Metal Hurlant. He is a member of the Oklahoma Cartoonists Hall of Fame. MV

MINIVIEW: Captain Gravity and the Power of the Vril [penny farthing press; graphic novel] Excellent art and story in the grand tradition of the pulp magazines of the '30s and '40s! If you enjoy the high adventure of the Indiana Jones films, you'll love Captain Gravity!