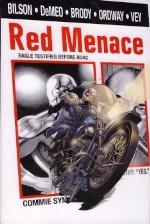 Several months ago, I praised the first issue of the Red-Menace miniseries. Having now read the collected version, I?m compelled to pass on to you another strong recommendation, as the middle and end proved as fresh and interesting as the beginning.

Set in the midst of the McCarthy era, Red Menace is one of the better period pieces I?ve found in comics shops in a while. Telling the story of a soldier-cum-super-hero who is patriotic to a fault, yet still gets used and abused by his government, Menace immediately draws readers in, then treats them to a roller-coaster ride brimming with super-hero action, political intrigue and interesting characters on both sides.

Writers Danny Bilson, Paul Demeo and Adam Brody pull out all creative stops in their collusion to create a hero who does what he does because it?s right, not because the people believe in him. And, yet, this hero-with-convictions doesn?t cause much, if any, suspension of disbelief, due to his all-too-human frailties and failings. Of course, the fact that he has no super-powers helps in that area, as well.

Bilson and company also do a stellar job illustrating the near- insanity that seemed to grip much of America at the time, as, in many cases, all that was required to ruin a person was the suggestion of sedition.

Penciler Jerry Ordway and inker Al Vey conspire to produce some of the most crisp, vibrant art found in comics today. The clear lines and dynamic figures contribute heartily to the action fairly jumping off the page. And, while no real risks are taken with panel arrangement, Ordway still proves himself a superior storyteller. One change I should make from my review of the premiere issue: this book is not recommended for all ages, as some language and graphic imagery (which wasn?t in issue #1) are unsuitable for younger readers.