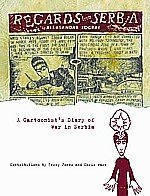 Regards from Serbia/$19.95 and 287 pages from Top Shelf/art and story by Aleksandar Zograf/available at comics shops and www.topshelf.com.

What can possibly recommend a crudely drawn, sometimes plodding, email laden, autobiographical account of the war in Serbia in the 1990s? It is a question that took some careful thought to answer. My first answer is that reading Regards from Serbia requires thought. I like challenging work and that this collection focuses on the human response to the situation instead of the political or theological aspects of war. It is also obvious that the author loves people. I like people whose priority is people.

In addition, an extensive section of emails that was sent by Zograf during the conflict were at first boring because of the repetition of events. But that very repetition eventually revealed the grinding hopelessness in a war zone.

The second answer is that Zograf’s unpolished art is nevertheless distinctive, and the artist shies away from visually sensationalizing death. No gore. I like no gore.

I do wish, however, that he would improve his lettering. It is so sloppy that it draws attention to itself and away from the art.His art relies on thick lines and well-placed, heavy areas of black to convey a sense of despair and anguish. Heavily influenced by underground/alternative comic books, it reminds me of woodcuts. Don’t expect realistically drawn anatomy or settings.

An additional answer is that Regards from Serbia is recommended for adult readers for all of the right reasons. No lascivious sex and violence here, no profanity. Zograf is a sincere artist struggling with serious adult issues in a broken world.

Most telling is his answer for why he just didn’t leave Serbia during the war. Everyone he loved was there.

I think I’d really like to get to know this Serbian guy.