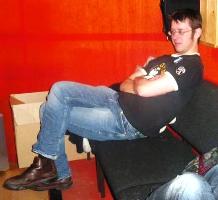 One of Renard City Creators

There are few comic book films that I feel that are like Reynard City. This is not meant to be arrogant and in some cases this is a good thing. A Batman film like Reynard City would probably be hated across the internet (and in all fairness rightly so).

In terms of “treating the weird like reality” Hellboy comes close, although the sequel went a bit too far into the “gaze into the wonderful imagination of Guillermo Del Toro!” Pan’s Labyrinth is a bit too much on the dark side for this comparison to work, even though it is a film I like.

In fact most of the stuff I like doesn’t really fit with what we do. I love Christopher Nolan, Orson Welles and Alan Moore amongst others. All very serious and not really relevant. That was until Scott Pilgrim.

Edgar Wright had me since Spaced. The bizarre energy matched with a real sweetness and care for the characters was a perfect combination. Shaun Of The Dead matched Notting Hill style romance with genuine horror scares, while Hot Fuzz was an inspired action film parody with some of my fave comedians doing cameos (Adam Buxton, Steve Coogan and the eternally under rated Kevin Eldon).

But Scott Pilgrim is something else. A bizarre mix of loud pop/rock music, video game references and teenage awkwardness, it is a film that is both ludicrously over the top and yet somehow oddly sweet as well. It is one of those things that is not for everyone but it’s worth sticking with.

For those who have not seen the film/ read the graphic novels it is about Scott, a 22 year old going out with a high school student who falls in love with a woman who appears in his dreams. There is a slight catch- she has 7 evil exes he has to defeat in bizarre Street Fighter style battles.

There are a number of brilliant references (including actual sound samples from the likes of Sonic and Street Fighter and I’m fairly sure there’s a reference to the opening of Soul Calibur 4 in there. If I’m wrong this will make me sound like an idiot.)

However if the film was just a flashy reference to the video games of my youth it is unlikely it would hold my attention for an hour and a half. In the making of they talk of it like a musical. Only instead of expressing themselves through song, they do so with fighting. This is like a less serious version of what they did in Crouching Tiger Hidden Dragon.

Some people have quibbled about the casting, especially Michael Cera as Scott. Personally I think the casting is spot on. I know he’s not everyone’s favourite but I’ve liked Michael Cera since Arrested Development. OK, arguably Jesse Eisenberg could do it too but if he did this and Zombieland everyone would pick on him too. Besides, he has The Social Network (a great film incidentally but not relevant to this.)

However I do think the cast all do great performances. Brandon Routh and Chris Evans clearly have great fun playing very different characters to their established superheroes. The “banter” they do is one of the highlights of the film. In fact a lot of the dialogue has this faux over confidence that is just the right side of silly.

In short, I love this film. My personal feeling is if you want more films like this don’t download them. Watch them in the cinema, buy them on DVD. If you bemoan a lack of creativity and Hollywood but do not seek out films like this you have only yourself to blame. Unless you don’t like films like this, in which case fair enough.