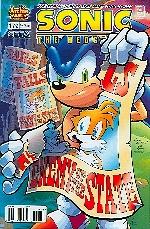 Sonic the Hedgehog #s175-179/$2.25 and 22 pages each from Archie Comics/art: Tracy Yardley; words: Ian Flynn/sold at lots of locations and at www.archiecomics.com. If you think that “funny animal” comic books are dead, think again.

What are funny animal comic books? Oh, you know: Bugs Bunny, Pogo, Mickey Mouse, Mighty Mouse, Woody Woodpecker, The Fox and the Crow. They all used to have their own titles back when most kids read comic books.

This column reviews the one-hundred and seventy ninth issue of Sonic. Wow.

If you think that Sonic is just a comic book based on a video game that just happens to feature funny animals, think again and again. Sonic is much more than that.

In these reviewed issues, Sonic and his gang fight a major war, and Sonic and his best friend settle a major dispute. There are lots of elements of both the fantasy, techno, and science-fiction genres. And although Sonic definitely targets a young audience, there is much here that will satisfy a divergent readership. Who woulda thunk.

Consider the art. Although obviously manga and animation influenced, the artist has her own distinct style. It is dynamic, visually easy to read, creative, and just plain fun.

Consider the story. It’s a perfect introduction to the adventure and afore-mentioned genres for young readers, and yet there is still enough here to interest some die-hard older fans as well. The dialog is crisp and believable, and the plot is fast-paced and detailed.

Consider those funny animals. There is still an active, though small, fandom for furry folks, and Sonic is one of the few titles even available to satisfy their appetites. So, what, Mr. Usually Harsh Critic, is there not to love about Sonic? Gosh, I don’t know.

Sonic the Hedgehog is recommended for the many different audiences mentioned above.

Back to Comic Book Review ( Sonic the Hedgehog )