Spiderman Reign,
Is the Future Bleak? 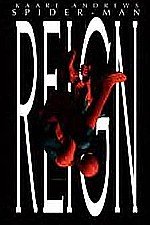 The future is bleak. New York City has become a police state, the people’s rights have been stolen, the “news” is only what local government wants the people to hear, and superheroes have been outlawed and become extinct. That’s the setting in a very dark story from Marvel entitled Spider-Man: Reign, written and drawn by Kaare Andrews, with an art assist by Jose Villarrubia.

Heavily influenced by Frank Miller’s futuristic Batman story from the ‘80's, this tale puts an aged Peter Parker back into costume to face an old villain who’s pulling all the strings from behind the scenes.

The good: Andrews treats the reader to interesting future versions of Peter Parker and his long-time employer/antagonist, J. Jonah Jameson. The interaction between the two characters is also intriguing, and long-time fans will appreciate the role Jameson plays in the reappearance of Parker’s alter ego.

There is also a satisfying resolution to the story that speaks of mankind’s need for freedom. And, for those who have so long been privy to this character’s angst, there is Peter Parker’s victory over the decades-long crushing guilt over the death of loved ones. That’s good stuff in the area of character development.

The bad: I wasn’t impressed with the derivative nature of the story. The art, the tone, the entire “feel” is “Dark Knight” via comics fans’ favorite wall-crawler. Granted, Kaare Andrews’ pacing and storytelling are highly evolved and entertaining. And I can sympathize with the desire to pay homage to a creator who left such a big impression on the medium. After all, creators are fans, just like you and I. However, I wonder if this work will be remembered more for Andrews’ own unique style and vision, or that of a man he admired. I believe it’s a fair question.

Spider-Man: Reign is recommended for mature readers due to violent imagery. Find it at comics shops and online retailers and auctions.