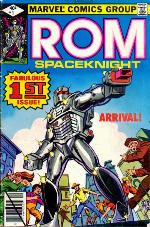 As an 11-year-old child, discovering Rom: Spaceknight was just more icing on the cake that was the world of comics. The exciting concept of a heroic alien, stationed on our planet to wipe out an evil alien race living right under our noses? C’mon! You expect any red- blooded boy to pass that up?

True, what then seemed so amazingly original was not; at least not completely. And, the wonderfully dramatic and angst-ridden dialogue of a man who had traded his (alien) humanity to become a living weapon against evil now seems quite over the top, at times. Despite all of that, however, Rom, a production of Marvel Comics, which began at the tail-end of 1979, and ran through 1986, still appeals. It’s the same appeal I have for those habit-forming, goofy episodes of the original Star Trek series. Or any of the grade “B” sci-fi flicks I can’t seem to resist. (Mystery Science Theater 3000, anyone?)

There is some solid characterization there, however, thanks to Bill Mantlo, who wrote the entire series, Annuals included. Though a bit black and white, there is still room for heroes that are true-blue, and villains that are..., well, truly villainous. That was Rom and the evil “Dire Wraiths”, respectively.

Nearly every issue of Rom was an action-filled page turner, with little time for readers to catch their breath. And, with the premise that practically anyone could be a Wraith, there were ample twists and turns along the way.

Add to Mantlo’s work that of two legendary comics artists, Sal Buscema, whose ability to portray breakneck comics action is surpassed by no one in the industry to this day, and Steve Ditko, co- creator of Spider-Man and Dr. Strange, who took over with issue 59, and you have a series that begs the question, “Why are there no Rom trade paperbacks?”

Rom: Spaceknight is recommended for all ages. Find it at comics shops and online retailers and auctions. Prices vary.

Back to Comic Book Review ( Rom )