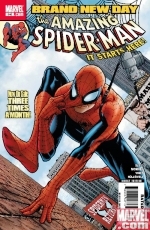 For those who have yet to delve into the “Brand New Day” storyline in Marvel’s The Amazing Spider Man, this is your spoiler warning: Go away NOW.

That said, allow me to express my excitement at what the publisher is doing with it’s flagship character. Having gotten rid of Peter Parker’s wife, Mary Jane (No time to tell you how - go ask a comic book retailer or fan about “One More Day.”), and re- established him as a single man, Marvel has increased the possibility of many more interesting relationship dynamics, which is part of what made the character much more interesting 20 years ago.

Additionally, the creators have wasted no time ramping up the drama with fascinating goings-on in the super-hero’s life. Let’s sum up: J. Jonah Jameson has lost the Daily Bugle to a competitor, and is lying in a hospital bed. There are two new, and very intriguing, villains giving Spidey a lot of trouble, and one of them spends time disturbingly close to Peter’s Aunt May in his “alter ego.” Old spider- tracers (tracking devices used by Spider-man) are turning up on murder victims around New York. And, as if all of that weren’t enough, one of the most notorious crime families in the Marvel Universe has made the do-gooder one of their favorite people, adding to his already-dismal public approval ratings.

The first three issues of the now-thrice-weekly series were written by Dan Slott and drawn by Steve McNiven (one of the best Spider- Man artists in a long time, in my opinion), with issues 549 and 550 written and drawn by Marc Guggenheim and Salvador Larroca, respectively. Herein lies the only problem I see with the book. Changing up creative teams every three issues could make Amazing difficult to follow for fans, especially where varying art styles are concerned. My advice: Go back to a monthly schedule and one creative team.

Amazing Spider-Man is still recommended for older teens and up.