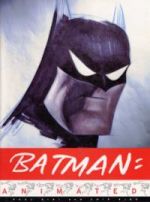 As a long-time comics enthusiast, the only thing that excites me as much as exceptional comics or comics-related material is a great coffee table book ABOUT exceptional comics or comics-related material. Thus, I present to you Batman: Animated. Although nearly a decade old, the book covers one of the most successful animated franchises ever, Batman: The Animated Series. No surprise that it's directly inspired by one of the most recognizable comic book characters in history. This is not the only reason the book is worth mention, however.

The brainchild of Paul Dini and Chip Kidd, as rabid a couple of Batman fans as you would find in any comics shop, the book is filled with some of the behind-the-scenes history of the program's origins, early character sketches and studies, story boards and background paintings, as well as information on actors and actresses that voiced the characters, the orchestrated music which graced the program, and photographic documentation on much of the mountain of merchandise inspired by the program. The book puts into perspective the impressive pervasiveness of the program's influence on society.

Additionally, considering the fact that the animated series presented a much greater portion of society than just comics fans with one of the purest, most honest and essential versions of Batman as has ever been seen anywhere, the importance of such a book becomes clear.

If I were given one wish for the book, however, it would be interviews with key individuals involved with the series. Writers, artists, even actors, some of whom were fans of Batman comics and proved it with the level of enthusiasm they brought to their roles. The book is still a gem, however, and worth seeking out.

Batman: Animated is recommended for fans of the animated series, as well as those interested in television history and production. You can still find it in some comics shops, as well as online auctions and retailers.