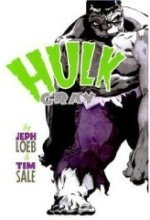 Sometimes, life is about catching up. I suppose, in the eyes of some, I will have only begun to do so, as I just now read my first comics work by the team of Jeph Loeb and Tim Sale.

“What’s that you say, Mr. Professional Comics Reviewer? Isn’t that somewhat irresponsible of you?” No, it isn’t, as I’m not a professional. Just a fan, lucky enough to have been syndicated, lo these past eight years. My only responsibility is to tell people about comics work that is exceptional, not trendy. And, in my opinion, Hulk Gray, while certainly popular with many, is not exceptional. Just solid.

It’s not that writer Jeph Loeb’s characterization is bad, there’s just nothing new, here. We’ve seen General Thunderbolt Ross’ obsessive hunting of the Hulk. We’ve seen the monster’s outrage at being locked in an underground bunker. We’ve seen the Hulk battle Iron Man, Betty Ross (the General’s daughter) pine away over Bruce Banner (aka The Hulk), Banner lament his Jekyll-and-Hyde condition, and Dr. Leonard Samson, Psychiatrist, analyze Bruce/Hulk, his behaviors and relationships. No, we’ve never seen the Hulk caress a cute little furry animal to death, and, while unusual (and creepy), that’s hardly enough on which to base a six-issue mini.

It’s not that Tim Sale’s art is below par. In fact, his Hulk looks quite formidable and frightening, if a little too “devilish” at times. After all, the Hulk is a monstrous brute, not a demon. The sometimes-pointy eyebrows and misshapen, “snaggly” teeth seem a bit over the top. Sale’s storytelling abilities are quite superb, and his characters highly expressive. They’re just not being used to convey any new ideas. It’s not that Hulk Gray isn’t recommended - it is, for all but the youngest readers. But I also recommend that it be bought at a discount, as I bought it. Find it at comics shops, comics conventions and online retailers and auctions.