Robotika, Definitely
Not the Song! 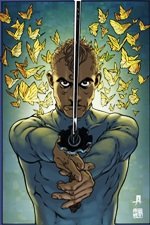 Robotika: For a Few Rubles More #1/ $3.95 and 35 pages from Archaia Studios Press/words by David Moran; art by Alex Sheikman /sold at book and comics shops; info at www.archaiastudios.com.

The first issue of a comic book series is similar to a first date. It’s impossible to learn everything about the object of one’s initial interest, but if the packaging isn’t right and there’s not enough that’s intriguing, there won’t be a second encounter, you can bet your sweet bippy.

Prepare to bet your sweet bippy (and your hard earned cash) on a second date.

Robotika is the second miniseries of a title that reads and looks a lot like the movie Mad Max if it had been set in Japan, filmed like the Western classic High Noon, and written by a streamlined H. P. Lovecraft (the master of subtle horror).

Throw in a little pseudo-science from the pulp magazines of the 1930s.

Its reality-based art is heavily influenced by Japanese and European comic art as well as by the home-grown American variety, and it just doesn’t get much better.

In addition, I applauded the restraint used when dealing with violence, nudity, profanity, and perversion in the first series. I clap heartily again.

However, the promotional blurb on its website says a member of an elite bodyguard protecting the queen is “sent on a mission to recover a stolen invention that, in the wrong hands, could trigger a bloody civil war”.

Well, that’s why you’ll need a second date. Not much of that is in the first issue, but it sure made me want to read the second one. And maybe sing: “Do not forsake me, oh my darling…geisha”.

Robotika: For a Few Rubles More is highly recommended.


Back to Comic Book Review ( Robotika )